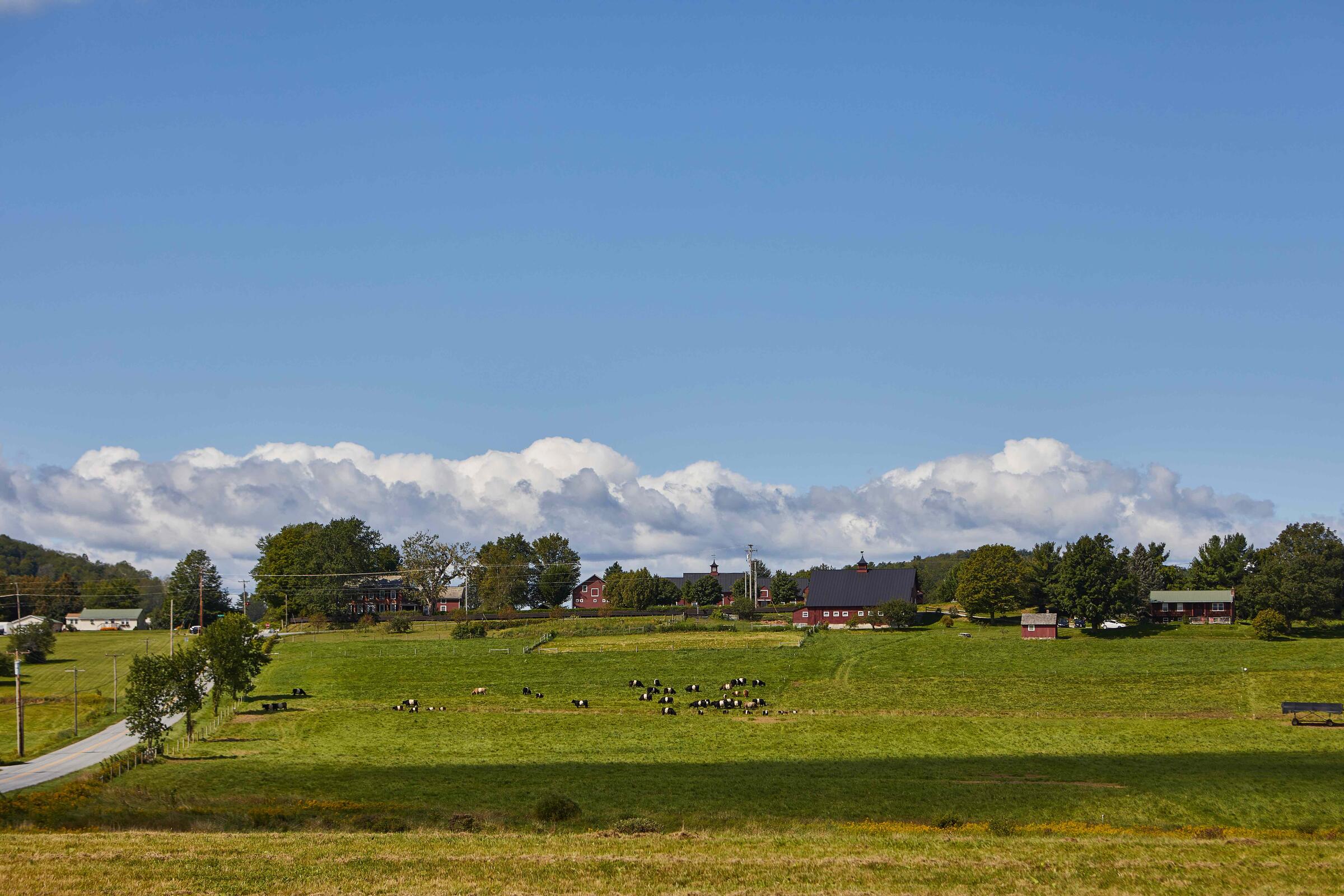 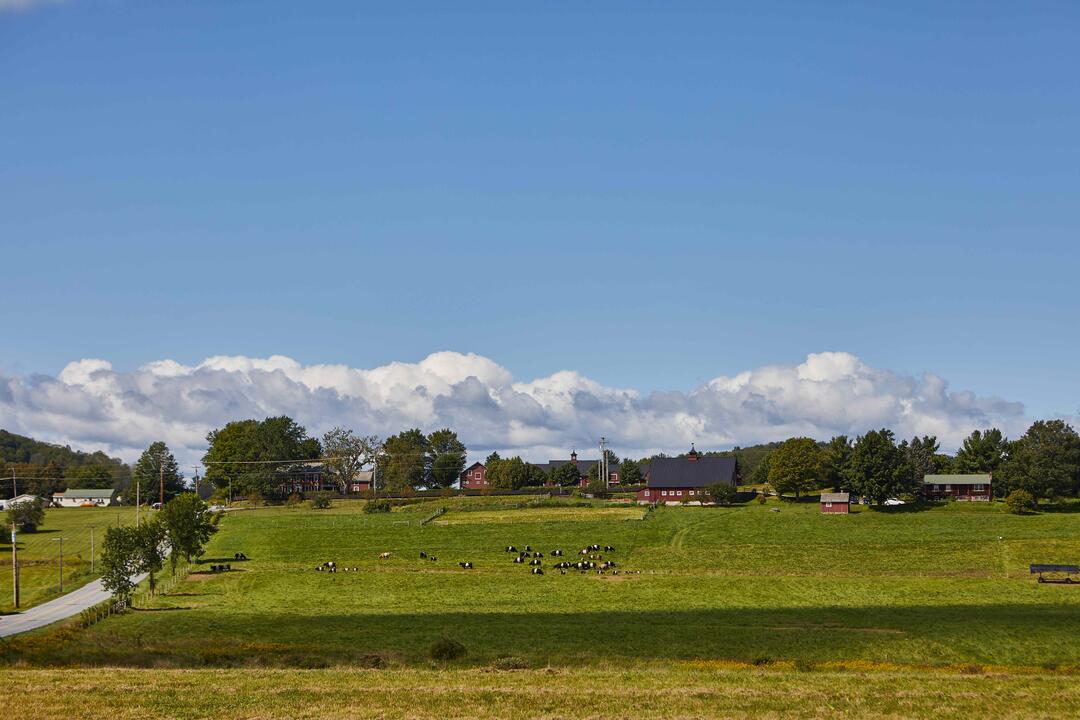 If you’ve visited the Philo Ridge Farm Market and kitchen, you’ve likely enjoyed views from our Farm Commons Barn of the Mud Hollow Brook wetlands, a source that flows from our land all the way to the LaPlatte River before ending up in Lake Champlain. It’s a beautiful spot, but closer inspection reveals that, like much of this land when we took over the farm, it’s in need of rehabilitation. The area has become overpopulated by buckthorn, an invasive shrub species that crowds native vegetation and can be a host for equally invasive viruses, fungi, and insects.

In keeping with the farm’s general focus on land and water health restoration, we’ve long wanted to improve these wetlands, hoping to positively impact beneficial insect populations and water quality. But when we were approached by Audubon Vermont to join their Bird and Bee Friendly Farming initiative, we gained a deeper understanding of how important the wetlands are for native bird species, and how helping birds creates a host of other land and climate benefits. We’re now partnering with Audubon Vermont to give renewed life to Mud Hollow Brook and the birds that call it home.

In 2008, Audubon Vermont started Foresters for the Birds, a project aimed at helping foresters manage timber practices in a way that supports songbird habitats. The project has been a success, expanding beyond Vermont and bringing private landowners, biologists, and foresters together to help birds and forests. But many bird species experiencing dramatic declines in Vermont and across North America depend not on forests but on open-space grassland and shrubland habitats. To protect these vulnerable populations as well, Audubon Vermont created the Champlain Valley Bird Initiative to begin restoring bird habitats on private and public open lands.

Grasslands and shrublands can be difficult to manage. These areas want to become forest again, and they can quickly be overrun by persistent invasive species like buckthorn. Shrublands like the Mud Hollow Brook wetlands are particularly stubborn, needing long-term maintenance to stay hospitable to native vegetation. In the past, conservation initiatives aimed at restoring these areas often failed because projects weren’t complex or lengthy enough, or private landowners became disengaged. Audubon Vermont’s program succeeded through reframing these lands as threatened bird habitats, giving landowners a metric—bird populations—by which to measure the success of their efforts. When birds begin to return and flourish, landowners are encouraged to continue their restoration projects.

“We’ve had such success with our Foresters for the Birds, it just made sense to start thinking about farmers for the birds,” says Margaret Fowle, Senior Conservation Biologist with Audubon Vermont. The large majority of Vermont’s grasslands and shrublands are under the stewardship of farms, so to broaden their work with these landscapes, Audubon Vermont began reaching out to farms about rehabilitating on-farm habitats for birds and essential pollinators like bees, upon which farms depend, and which are also experiencing steep declines. Partnering with the University of Vermont’s Gund Institute for Environment to develop project practices and documentation methods, they created the Bird and Bee Friendly Farming initiative. For the first two years, they tested the program with Ben & Jerry’s Caring Dairy farms; in 2021, they expanded to include the Intervale Center, a non-profit in Burlington focused on nurturing restorative local food economies, and a few other small pilot farms, including Philo Ridge Farm.

The program is a natural fit. Farmers “know more probably than I do, or our biologists know, about the specific ebbs and flows of bird populations on their own land,” says David Mears, Audubon Vermont’s Executive Director. They’re “very curious to know why there have been shifts over time from when they first started farming decades ago. Or why their parents or grandparents talked about certain kinds of birds that don’t show up anymore.” Discourse between environmental organizations and farms can often be divisive, David notes. This program demonstrates how much common interest exists between farms and conservationists and the benefits of working together.

“We were looking for places where we could demonstrate some of the conservation practices on farms that could benefit birds and bees,” Margaret explains. Philo Ridge Farm’s patch of wetlands is the perfect spot because, she says, “it’s open to the public and highly visible, and there was this really concrete and distinct project.” Not only were Audubon Vermont and the Gund Institute interested, the U.S. Fish and Wildlife Service and the Vermont Land Trust signed on to support the effort as well, understanding the importance of enhancing the Mud Hollow Brook wetlands and the opportunity to create a robust habitat by joining forces.

From Philo Ridge Farm, the Mud Hollow Brook runs through open fields and dense vegetation to the LaPlatte River before ending up in Lake Champlain. In addition to birds, bees, and native plants, the land it flows through provides habitat for other wildlife, including large mammals, who use the corridor to feed and mate. Like most land in Vermont, the watershed has seen a lot of development. This project, beginning as it does at the headwaters, offers an opportunity to improve the health of the entire corridor and bring visibility to the positive impact of conservation efforts. The partners hope to increase public enthusiasm for funding similar projects so that any farmer who wants to implement beneficial habitat practices can get the financial support they need to succeed.

The project is already underway—much of the buckthorn has been cleared and native willows planted. The plan is to continue adding beneficial species that bloom throughout the growing season, attracting pollinators and producing food resources and nesting areas for birds.

It takes time for plants to turn into something useful for the birds. Margaret predicts it will be about five years before there’s a visible difference in the habitat, maybe more. Audubon will monitor bird and insect populations every other year to track progress, while Philo Ridge Farm will monitor how well the willows and other plants grow, how difficult it is to keep the buckthorn cut back, and how water and soil health in the area evolve. The hope is that space opened up by the buckthorn’s removal will permanently change the seed bank of the wetlands, tipping the balance in favor of native plants as they gain more space to take hold and reproduce.

The Start of a Discussion

“When you think about birds, you get all these great co-benefits at the same time,” says Margaret, echoing the words of Thomas Lovejoy, the biologist known as the “Godfather of Biodiversity”: “If you take care of the birds, you take care of most of the environmental problems in the world.” Philo Ridge Farm’s dedication to regenerative farming and land stewardship practices is born of the same understanding—the benefits of restoring ecosystems to their natural rhythms reach far beyond the land itself.

“No one site can solve the climate crisis,” David says. But he points out that recovering some of the natural functioning of heavily modified farm landscapes improves carbon sequestration, the capacity for the land to hold water, and resilience to extreme weather events, including flooding. As with other Philo Ridge Farm biodiversity initiatives, which include the nurturing of a thriving perennial pasture system and the planting of over 1,500 trees on the property, this project will benefit more than just the birds and the bees.

“This project is important to Philo Ridge Farm because we want to produce products that reflect an interest in the whole ecological system,” says Philo Ridge Farm owner Peter Swift. He sees the Mud Hollow Brook project as an important conversation starter. “It’s something we can do at a small scale, in this small area, to create an awareness and a discussion about bird habitat, insect habitat, water quality, the co-benefits for pasture and animals, and the resulting quality of food. It’s all in the same discussion. And this is a great place to start that discussion.”

Learn more about, support, and get involved with the Bird and Bee Friendly Farming initiative.