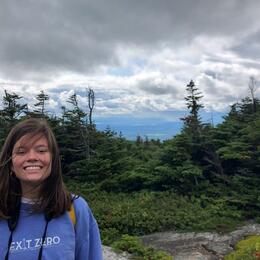 Something I’ve always been embarrassed about as a birder is my complete inability to whistle. I’m always open to hearing new tips and tricks but believe me, I have tried. It’s just not something I’ve been able to get the hang of. Luckily mastering a crow call has not been dependent on any whistling skills but I have been surprised at how tricky it’s been still. I’ve learned that crows (like myself) make lots of different sounds. Different sounds can be used to communicate different messages whether it be mating or alerting fellow crows to danger. What resonated most with me was that when young crows are begging their calls are more likely to be higher-pitched and nasally. Oddly not that different from my own experiences with whining to get what I want.

You can follow along with my videos of me practicing my crow calls below, and I hope to get some crow calls in return (both from actual crows and from all of you). I’m not a singer or vocalist by any means, but it has been a fun experiment in seeing what range of noises my throat can produce. I worked alongside some YouTube tutorials but I found myself most proud of the sounds I produced just mimicking the recordings on allaboutbirds.org. All About Birds writes that, “The American Crow is not known for the beauty of its song, a series of loud caws.”—but I would disagree. I’m finding a calming presence in the sounds of crows cawing outside my window (though my roommates might not have the same to say about the sounds I practice around our apartment). Happy Cawing!