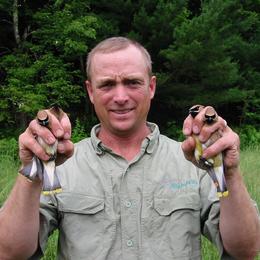 Twenty-one pairs of Bald Eagles nested in Vermont, fledging a total of 35 chicks. Since 1979, volunteers have been keeping tabs on Bald Eagles as part of Vermont Audubon's annual winter Bald Eagle survey. Learn about Audubon Vermont's role in Bald Eagle recovery in Vermont.

Common Terns remained steady at about 225 nesting pairs and 73 fledglings. Since 1988 biologists have worked to protect this state endangered species on Lake Champlain. These efforts have been successful and have resulted in a 300% increase in adult numbers since 1988. Explore the Common Tern Recovery Project.

A record high of 166 Black Terns was recorded in 2017 at Missisquoi National Wildlife Refuge. This species is vulnerable to loss of nesting marsh habitat. Learn more about the three tern species on Lake Champlain.

Common Loons are monitored by the Vermont Center for Ecostudies and also did well this year. In the annual Loon Watch, which is conducted every spring, there were more than 300 Common Loons seen across the state of Vermont.

Peregrine Falcons held their own in Vermont this year, with at least 50 pairs producing a minimum of 62 fledglings.  Over 45 citizen scientists, Audubon Vermont biologists, and VT Fish & Wildlife staff monitored occupied breeding territories throughout the season from April through July. Learn more about Audubon Vermont's work with Peregrine Falcon recovery.

The work of monitoring these species is overseen by the Vermont Fish and Wildlife Department. Audubon Vermont biologists monitor Common Terns, Peregrine Falcons and Bald Eagles and we partner with the state of Vermont which funds these efforts.

Watch this episode of Across the Fence to hear about our work: