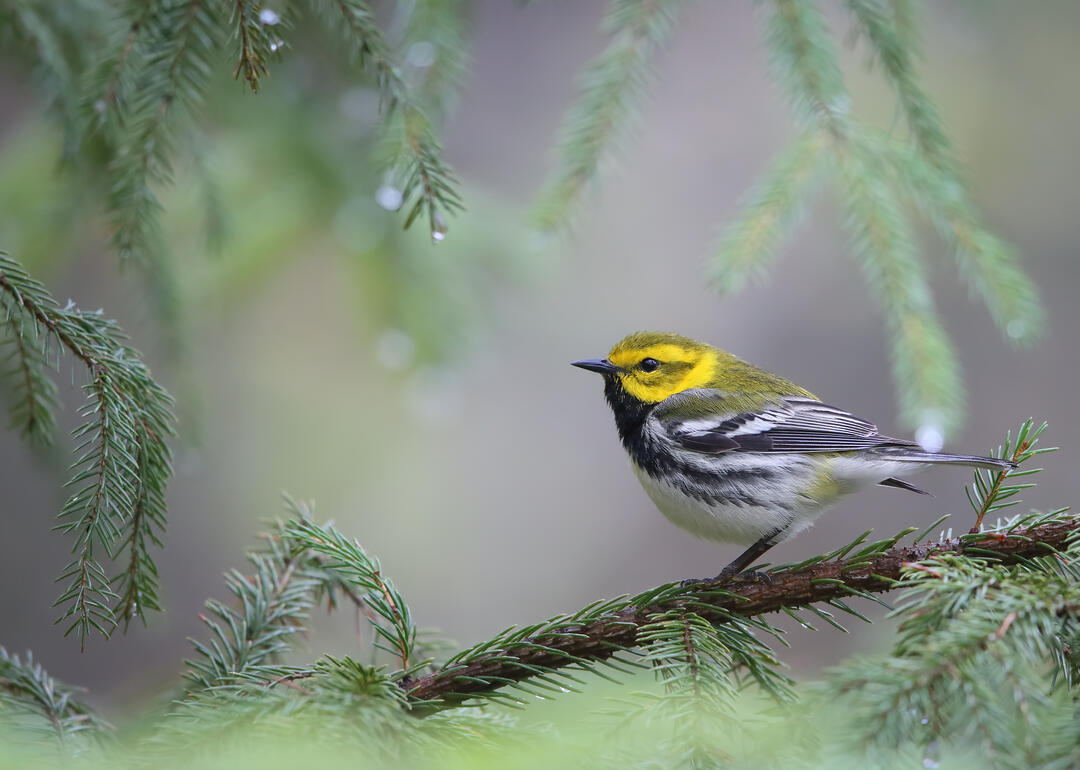 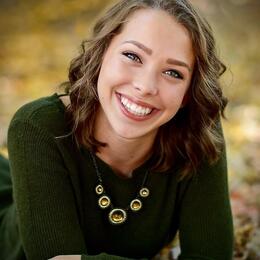 The Black-throated Green Warbler is a songbird found commonly throughout the northeastern U.S. and south-central Canada during the summer breeding season. As a resident of the sugar bush, and an advocate of the Bird-Friendly Maple Project, we should get to know this warbler a little better. Read on to get a sneak peek into the Black-throated Green’s personal life!

Both the male and female Black-throated Green Warbler stand out in a crowd with their black narrow beak, yellow face, olive back, and white wing bars on a contrasting black wing. They have a light yellow breast with black streaks running along the side, and black legs positioned near the back of the body, giving them the bowing posture characteristic to all warblers. Males are set apart by their affinity for finer fashion, note the black ascot-shaped patch along their throat, their namesake. You can think of the females patchy throat as a necklace full of black pearls, not quite as bold the male’s ascot, but distinguished and stylish nonetheless. These two are a shoe-in to win “best-dressed” at the next dinner party.

Diet: Gooey, crunchy, and filled with protein (with a side of ecological justice)

As an expert forager and avid insectivore, the Black-throated Green Warbler will go to great lengths for a good snack. Insects hiding out of view underneath leaves are no match for the warblers ability to hover below and snatch beetles, worms, and caterpillars right from the leaf! While the Black-throated Green Warbler prefers hairless caterpillars, they will adjust their preferences in the event of an outbreak of the non-native invasive European Gypsy moth, helping to control the abundance of this nuisance species.

Everybody needs friends, and you’ll find this social butterfly hanging out in flocks of black-capped chickadees, tufted titmice, and other warblers during fall migration. However, if you’re a male Black-throated Green Warbler hoping to make friends of your own kind during mating season, you’re in for a rude awakening.

Males, and occasionally females, are extremely territorial and will sing loud and proud to warn other’s that they’ve claimed a nesting area with their mate. If the song is not enough to intimidate the prospective individual, the two warblers will engage in a mid-air battle that often results in both individuals falling to the ground and jabbing each other with their beaks until the intruder or resident surrenders. The fight is often followed by a taunting victory flight, and an embarrassing flight of shame for the defeated bird. Unless you’re a warbler looking for trouble, it may be best to simply befriend your local bird watcher instead…

but I may be biased.

Black-throated Green Warblers prefer wooded areas for habitat, and often work together in pairs build their nests low to the ground (3-10 feet high), and close to the trunk of coniferous trees like spruce, cedar hemlock and pine. Warblers are serious about comfort and dedicate a lot of time an energy to building their soft, cup-like nests, complete with spider webs, plant fibers, moss, fur, feathers, and hair. These nests are about as close to memory foam the avian world gets! When the warbler pair aren’t exhausting themselves with casual day-to-day activities like building an entire nest and rearing a brood of 3-5 insatiable fledglings, you may find them taking a refreshing dip in a nearby stream or puddle.

The Black-throated Green Warbler will travel south from its spring and summer breeding grounds into warmer, tropical regions to escape the harsh northern winter. While this warm vacation may sound tempting to those of us currently braving the frigid temperatures, the warblers can’t hop on plane and find relief in a few short hours. Their journey can be up to 2,000 miles, with flocks typically traveling from August through October traveling on wing, at night, in all kinds of weather. Doesn’t sound so enticing now, does it? These little songbirds earn their vacation, and enjoy the tropical climate until they make the return trip to their breeding grounds in late spring.

Looking for Space by John Denver

Summer is for Falling in Love by Sarah Kang

On My Way by Phil Collins

Keeps Me Going by Jacob Banks

Come Fly with Me by Frank Sinatra

While their approach to conflict resolution is quite physical, the Black-throated Green Warbler prefers to communicate through two main songs. The song that males use to proclaim their territory and ward off intruders at sunrise and sunset can be described as an intimidating: zoo zee zoo zoo zee, with the zee pitched a bit higher than the zoo.

When communicating with their mate, this warbler will turn on the charm with the alluring: zee zee zee zoo zee. The Black-throated Green is so serious about communication that he will even take on a third approach during mating season, fluffing up his feathers to share his true feelings with the lady warblers.

Black-throated Green Warblers need both northeastern breeding habitat and tropical overwintering havens in order to survive, and as a resident of the understory and mid-story forest habitat, they require intact forests. Habitat fragmentation due to logging and development in both of these areas have led to reduced warbler habitat and increased forest edge: prime real-estate for predators like sharp-shinned and Cooper’s hawks, blue jays, and raccoons. As a resident of the sugar bush, they are further threatened by sugar maple monocultures which lack the structural variety necessary for the Black-throated Green Warbler’s diet and nesting requirements.

You can be a friend to the birds of the sugar bush by supporting maple producers who are certified through the Bird-Friendly Maple Project, or by following the Project’s sustainable forest guidelines and earning the stamp of approval for your products.