What do you think of when you imagine a ladybug (aka lady beetle)? Is it red with black spots? For years, this was the only image that came to mind when I thought about lady beetles. Furthermore, I had no idea how many different lady beetle species exist, and that the only species I was familiar with was the invasive Asian Lady Beetle (Harmonia axyridis)–the species that commonly congregates in people’s homes during winter. In Vermont alone, there are 42 recorded species of lady beetle (35 native and 7 introduced), and we are still discovering species that have not been previously recorded.

Lady beetles come in different sizes, colors, and shapes, ranging from just fractions of a centimeter to nearly a centimeter in length. Some are black with red spots, others are the classic red with black spots, some are orange, yellow, or brown, and some have bars instead of spots or no spots at all. These beetles can be found in all types of habitats, from fields, to forests, shrubland, and swamps, to the garden in your backyard!

Despite differences in appearance and habitat preference, many lady beetles share an important feature: they act as a biological pest control, munching down aphids, plant mites, scale insects, and other soft-bodied pests. Native lady beetles have evolved alongside native pest species, and many synchronize their life cycles to align with their pest of choice. For example, both Hudsonian Ladybirds (Mulsantina hudsonica) and Eye-spotted Lady Beetles (Anatis mali) have evolved to synchronize their life cycles with that of the Balsam Twig Aphid (Mindarus abietinus). This means that the lady beetle larvae are growing when aphid populations are at their peak, giving the beetles an increased chance of survival. Balsam Fir trees also benefit, as the growing lady beetles reduce the pest load on the trees. Other native lady beetle species have begun to associate with invasive pests, like the Twice-stabbed Lady Beetle (Chilocorus stigma) and Beech Bark Scale insects, helping to reduce invasive pest loads on infected trees. 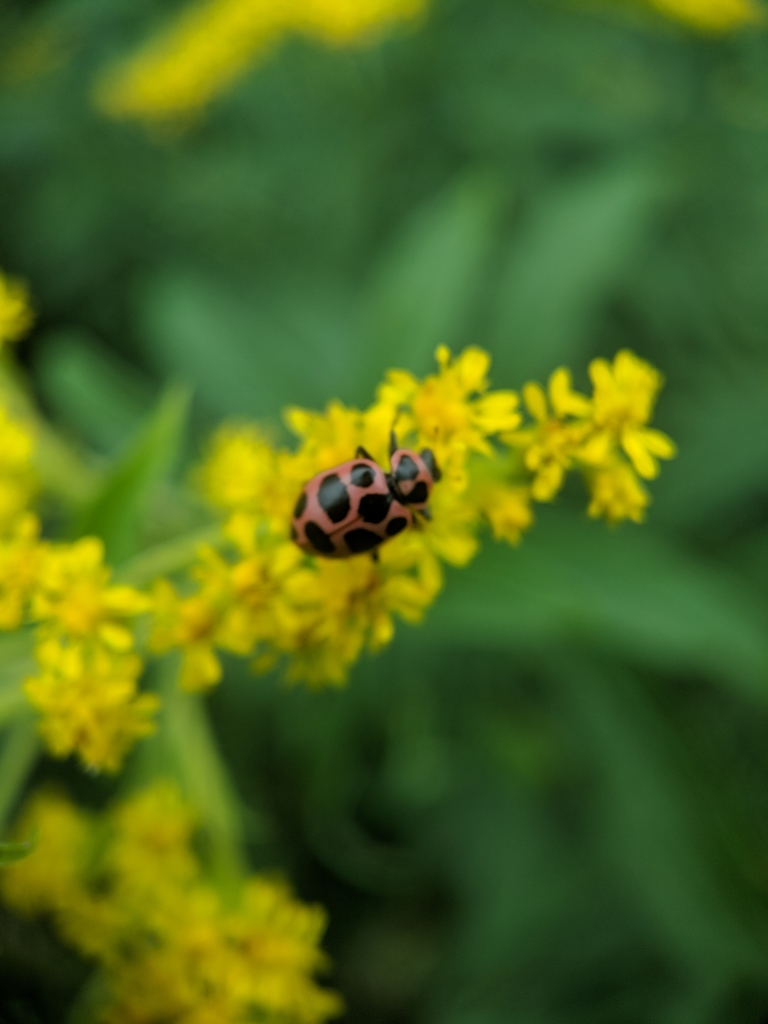 A spotted Lady Beetle, a native ladybug of Vermont, crawls up the small yellow flowers of a plant. The beetle is oblong, a pale red, and has spots of different sizes on its back. Photo: Nathaniel Sharp 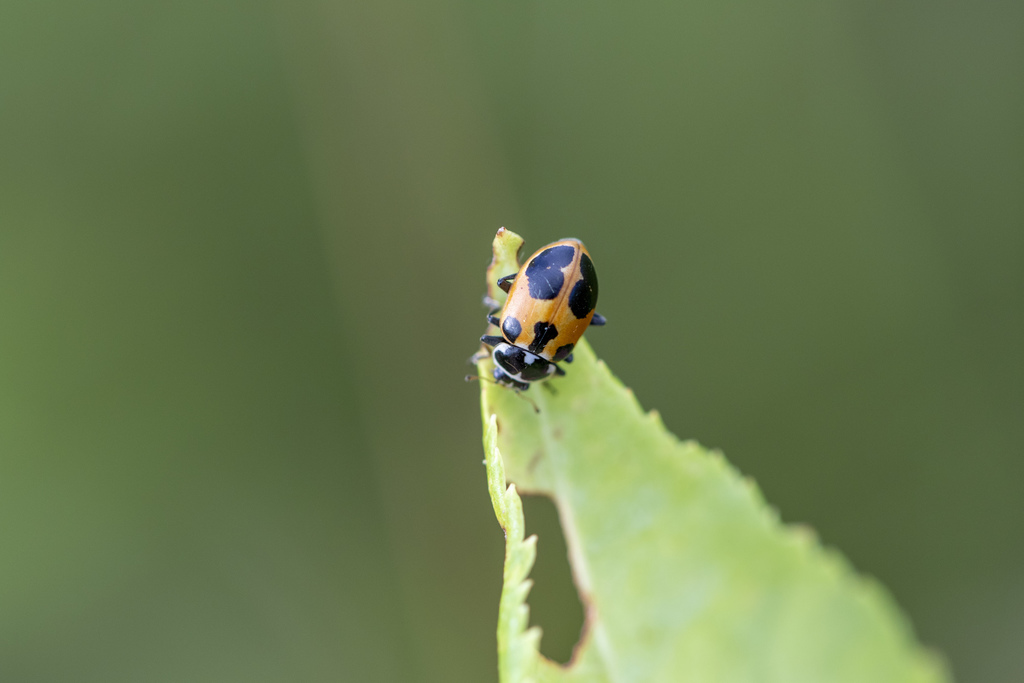 A Parenthesis Lady Beetle, a native ladybug of Vermont that is oblong in shape has a pair of large spots that look like parentheses on its back. It is seen up-close on the tip of a leaf. Photo: Kent McFarland 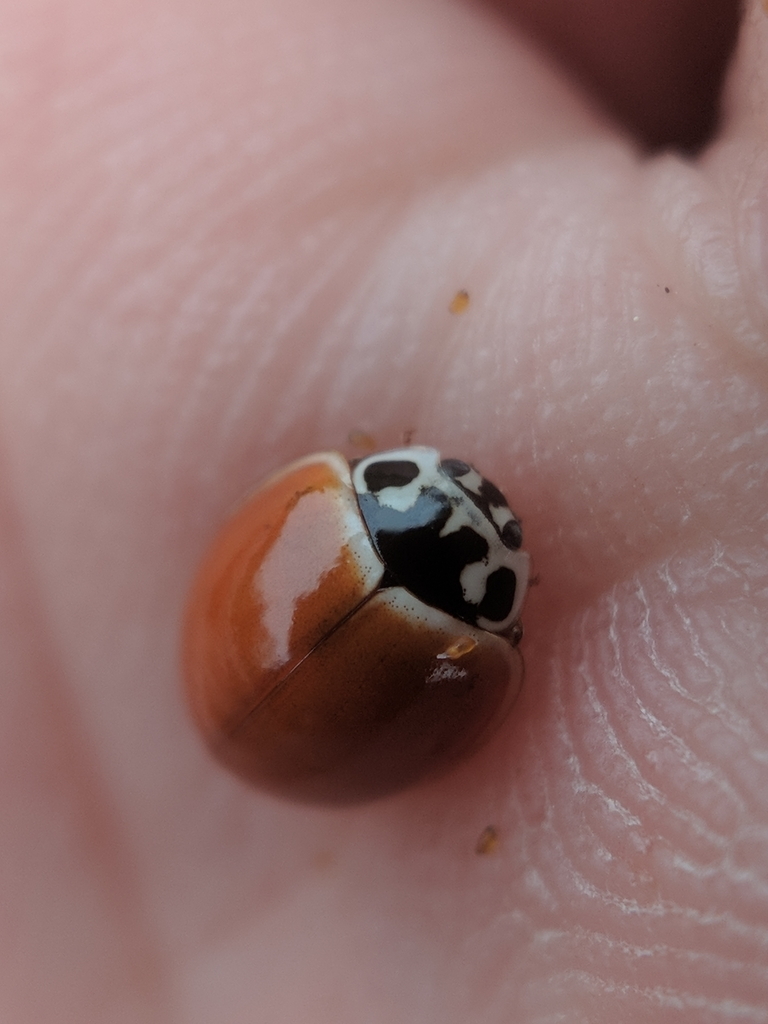 Painted Ladybird, a ladybug native to Vermont with large ink-blot like spots on a white background. Photo: Kent McFarland 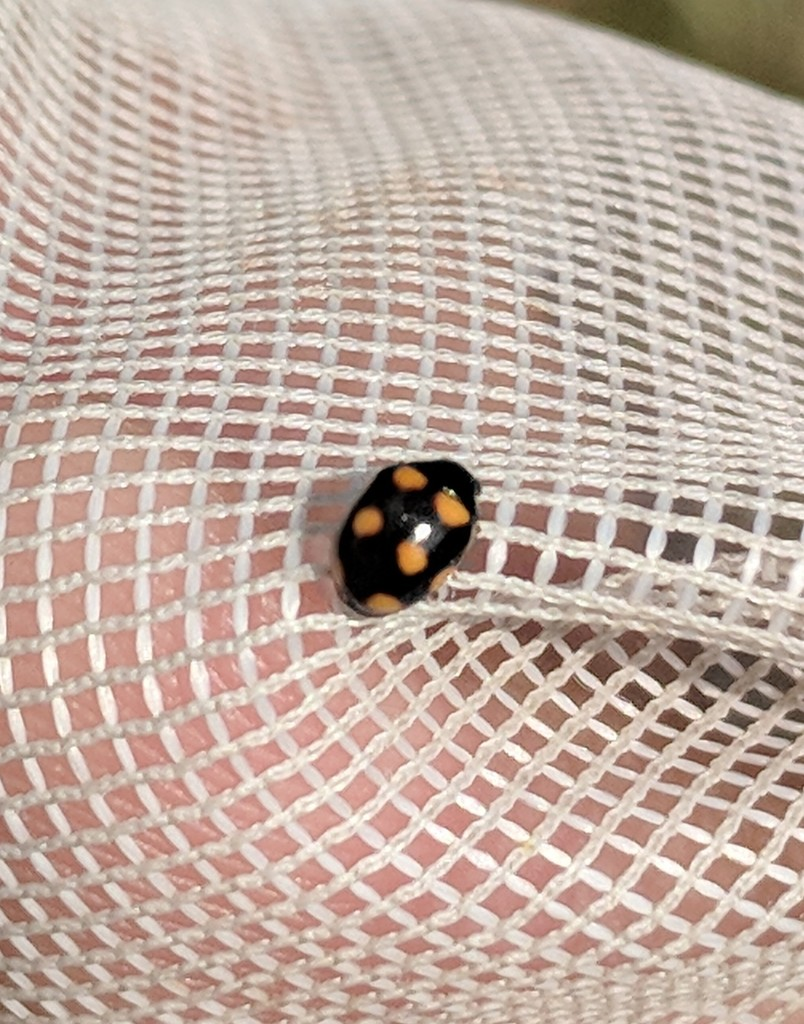 A Usine Spurleg Lady Beetle, a native ladybug of Vermont, has a shiny black head and back with orange spots and crawls across a net and a hand. Photo: Nathaniel Sharp

Vermont appears to be experiencing native lady beetle declines as well. Currently, 12 of Vermont’s native lady beetle species have not been seen in over 40 years. That said, the last full survey of Vermont’s lady beetle fauna was completed in 1976. We don’t know if these 12 missing species have been extirpated or still exist in low numbers, and as well we don’t know what conservation measures may be needed to support potentially-declining native lady beetle populations in Vermont. To answer these questions, the Vermont Atlas of Life team at the Vermont Center for Ecostudies started the Vermont Lady Beetle Atlas. We are calling on volunteer naturalists across the state to join us in our search, which will increase the chances of finding these beetles. Already, volunteer naturalists have rediscovered four of Vermont’s lost lady beetle species, recorded three new species, and doubled the number of research-grade,  lady beetle observations uploaded to iNaturalist in our pilot year.

If you would like to help in our lady beetle quest, simply install the free  iNaturalist app to your phone (or camera and internet-connected device of choice) and upload pictures of any lady beetle you encounter to the site! Visit the Vermont Lady Beetle Atlas website to find out more ways to get involved and learn more about these fascinating beetles.