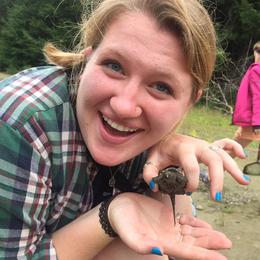 This week we dove into all thing wet and wonderful! We cooled off on the warm summer days by building boats, dams, and exploring the pond, brook, and river. We discovered the creatures that live below the water surface and enjoy exploring our watery worlds.

On Monday we invesitgated what it means to have a healthy water area. we discussed the food web of a water area nad enjoyed lunch at the brook. While we were at the brook we built boats, and did some pH testing, Turns out we have a very healthy brook!

On Tuesday we looks at the tiny critters that live in our water, Macroinvertebrates. We learned about them through a game of Simon Says and we also got to design and make our own Macroinverebrate too. We spent the afternoon catching these small critters at the river and enjoyed snack in the field.

Wednesday was all about amphibians! We played Posion Dart Frog and built some frog houses as well as did an amphibian hunt too. After snack we learned about the life cycle of a frog and then went adn collected cirtters at Beaver Pond! Later in the same we wrote some water haiku's and did some jounraling too.

Thursday was focused on bouyancy and boats. We discussed how fish float beacuse they have a swim bladder and why other things float in water too, they are less dense. We then tested materials and built boats to send down the brook. We also collected rocks at the brook and painted them to later spread out around Audubon's trails.

Friday, out last day! we built porcupine houses and discussed more about fish anatomy too. We turned a camper into a beaver as well! We spent the afternoon cooling off at the brook and before we new it, it was closing circle time!